About 46 people were present. It was proposed that a group be formed in Geelong and this was carried unanimously.

The Guild aimed not only to maintain high standards, but also to provide mutual enjoyment, stimulus and books. However to become a member an interest in embroidery was the only requirement!  (these notes are taken from the first history of our branch written by Isla Adamson and can be read or borrowed from our Library.)

We celebrated our Golden Anniversary with a Luncheon at Truffleduck on Saturday 23rd June and over 90 members and past members enjoyed a fabulous day. Several founding members were contacted including Penny Garnett, Norma Long and Isla Adamson. Isla was able to attend the luncheon and Penny sent a speech to be read by a friend.

More about our special day to come.

We are now looking forward to our spectacular Exhibition in September – SHAZAM! 50 Magical Years with the theme of 1001 Arabian Nights. There will be plenty of golden embroidery on show as well as challenge pieces on the theme. Our guidance groups have been busy since last year working on their on special challenge pieces and there will be some spectacular items to view. There will also be individual entries on the challenge so reminding all our members to start stitching on the theme.

Our first Sit and Sew meeting for the year was held at St Davids on Monday 12th February. A great turn out to hear the speakers from the Lions Club of Quilters, Victoria They are endeavouring to collect, record, preserve and display quilts that reflect what local quilters produce in communities across the state.

We have already had a very successful introduction to the year with the first Summer school teaching Wool Hexagons, Tassells, and Bejewelled Treasure Chests.

We also featured at the Craft Alive show in Werribbee and had the first meeting for the year of our Wyndham Vale Group – now  meeting at the Manor Lakes Community Centre on the first Thursday of the month. Canvaswork group meets on the third Thursday of the Month and have had one session designing amulet bags and are about to learn creative ways to colour canvas

Don’t forget to save the date for Breaking Traditions our GEEtag Textile Arts Group Exhibition on March 16th- 18th. Entry is free from 10am – 3pm at The Shearers Arms Gallery, 202 Aberdeen Street Geelon West

Tickets are now available ($10) for the Opening night with Glenys Mann, drinks and nibblies and of course the stunning exhibition.

… and we are on display at GPAC the Geelong Performing Arts Centre in Little Malop Street. Our tree bears decorations stitched by our members: birds, stars and balls.

Atop the tree perches our 50th Birthday Angel stitched by Rosalie Cull who masterminded this wonderful display. Thanks to all those who organised workshops, stitched ornaments and trimmed our tree. 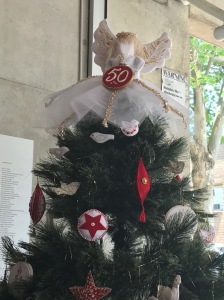 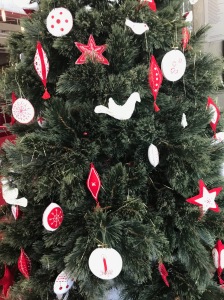 END_OF_DOCUMENT_TOKEN_TO_BE_REPLACED

Have you ever thought of doing an Intermediate subject? This year we are offering Surface Stichery and Goldwork as our options.

What is an Intermediate Certificate Subject?
An Intermediate subject is a series of classes designed to move you beyond the beginner stage. It develops your skills in a particular technique as well as your confidence in general. Different techniques are offered from year to year.Each course leads you beyond the basics of a technique, building up a collection of stitch samples and knowledge pertaining to that particular technique.

Most courses require the student to produce two small pieces and one major piece. A ‘major piece’ does not mean that the student has to produce a huge piece of work, but rather a piece of work that demonstrates that the student has a good grasp of the skills learned for the technique. Student work is assessed by the tutor, and a date for assessment is usually set for approximately six weeks after the last class of the course.

Each subject runs for six sessions, from 10.00am to 2.30 (including a 30 minute lunch break).There will be homework after each session, and at the end you’ll hand in a folder of notes and your finished works for assessment.

To enrol in most subjects, students must demonstrate a knowledge of basic stitches, as well as some experience in the basics of the chosen technique. Surface Stitchery is however a basic course. If you successfully complete three Intermediate subjects within five years, and take part in the Intermediate Final Display, you will receive your Intermediate Certificate.

Or you can simply take individual subjects from time to time. Many members find these courses so valuable that they complete more than three courses, learning a wide variety of techniques.

We celebrated our 49th birthday as a branch of the Guild with Victorian President Linda Hagar presenting 25 year membership awards to Dorothy Day and to Jacqui Volpe (in absentia).

She also presented the Intermediate Certificate to Leonie Lister and Carmel Schulze. Their work for the three subjects completed was on display and was marvelled at by all. 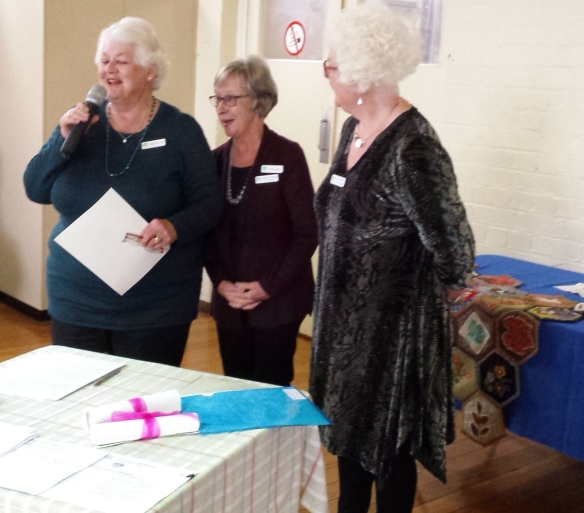 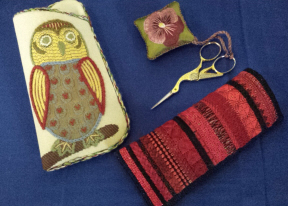 We enjoyed our Annual General Meeting in December with our visitors from Melbourne and elected our new committee for 2017. Our new President is Lyn Hughes. Retiring President Valda King was thanked for the amazing work she has done to keep our group vibrantly alive with a bright future.

We have had two very interesting meetings in the past months.

At our October meeting we had two guest speakers, Diane Looker and Pam Timmins from  ‘Geelong Coast Days for Girls’ which is part of a world wide group. They offer a feminine hygiene programme providing quality, sustainable solutions for girls who have nothing suitable to manage their periods. Kits are made and distributed to help give dignity, health, education and safety to the girls who receive them, including so far in Nepal, East Timor, The Solomon Islands, New Guinea, Uganda, Cambodia, Malawi and Zam

bia.
Several of our members have become involved and are doing a great job.

The display for October was Brooches and they ranged from beautiful to quirky!

In November we met at All Saints Hall for our Christmas lunch which was a shared plate affair and proved a hit for variety and taste.  Speaker was our own Denise Bell, enthusiastic Lace maker who visited Slovenia this year for the 17th World Lace Congress of OIDFA — the International organization for bobbin and needle lace held in Ljubljana. She also attended some of the classes offered as part of the congress. Idrija and Pag are two areas that have their own styles of lace making. Lace is so important in Slovenia that stamps were issued to mark the occasion.

Our December meeting at St Davids on Monday 12th is our AGM and you are all welcome to join in and also view the Intermediate Certificate Canvas Work Display. Classes for next year will be available for signing up so don’t miss out.

Our Sit and Sew meeting on 12th September was the occasion of a bounteous display on the botanical and floral theme for Spring. It is always fascinating to see the variety of treatments of floral motifs.

We are looking forward to our international visitor Hazel Blomkamp and her Needlelace in Embroidery class. 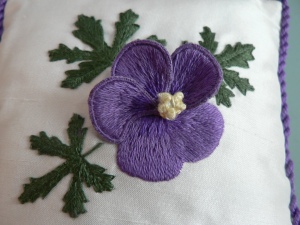 Some more floral work is bound to be stitched as a result. 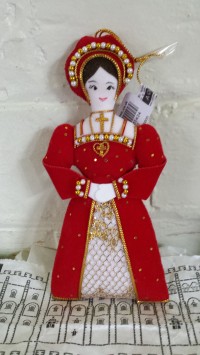 Queen Mary at our June Meeting

May June July and August find many of us indoors by the fire stitching, or travelling north for the sunshine.We did venture out for our Birthday celebrations in June and welcomed our new State President Linda Hagar. Four members Hilde Brenner, Barbara Coote, Marj Kavanagh and Dorothy Cavill have earned their 25 year membership brooches.

Meetings have, however, shown off some of our work on themes.In May we honoured Mothers and several pieces embroidered by our mothers were on display.

August proved that bags are popular items to stitch as many and varied ones appeared on show. September will show that Spring has sprung with a Floral and Botanical theme.October gives us a chance to show off our Brooches.

Our special interest groups have been busy with interesting results.

Our enthusiastic speaker, Robyn Steele Stickland from Opendrawer in Camberwell showed some of her many collections including Buttons and Embroidery tools. She discovered that many of us have similar addictions and explored the reasons why we feel the need to “hoard” such things (not to mention the dreaded “Stash” word. 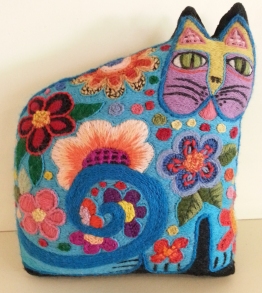 At her shop she runs classes in all sorts of textile work and also gives us a chance to recycle some of our stash at her market stall days. See her web site for more  of what’s on.

We also had fun working on the delightful kits for pincushions that Brenda Ryan had brought along. Hopefully some will be done for our next exhibition! We plan to have a group to work on making items for the exhibition and if you want to join in please see a committee member.

Come and visit Kerrie’s Cat at Our Heritage Festival display at the Wintergarden, 51 McKillop Street this weekend April 29th to May 1st : 10am to 4pm

Classes coming up include a visit from Internationally acclaimed tutor Hazel Blomkamp who will be exploring Needle Lace in Embroidery on 13th and 14th of July.

Exhibition April/May 2021…Up Up and Away!